I'm writing this for the benefit of others administering Windows machines with Group Policies.  It's an issue I'd been tearing my hair out over for the last couple weeks or so.

Let's say you created (locally) and tested an event trigger using a custom XML events filter on a machine, and it's working just fine, and now you want to make it a group policy (GPO).
There are some important differences in the behavior of the task scheduler that's found locally on a machine, and its group policy preferences equivalent.  The local version will automatically convert HTML entities to the correct character (e.g. it will convert &#xA; to a newline, a.k.a. HTML Encoded Line Feed character).  The GPPreferences scheduler will not do this.  Make sure to be using the actual characters those entities represent.
Also, note there is a bug in the GP reports for the scheduler settings.  The report will always show those being set even if you actually uncheck all the settings, but it will behave correctly.

If you're still having problems, look in the event viewer for log entries from Group Policy Scheduled Task.  They might be helpful, maybe (although, honestly, most of the times those log entries just don't have enough information to diagnose the problem, just enough to see that there is one).

So I keep seeing this BS on my news feed: 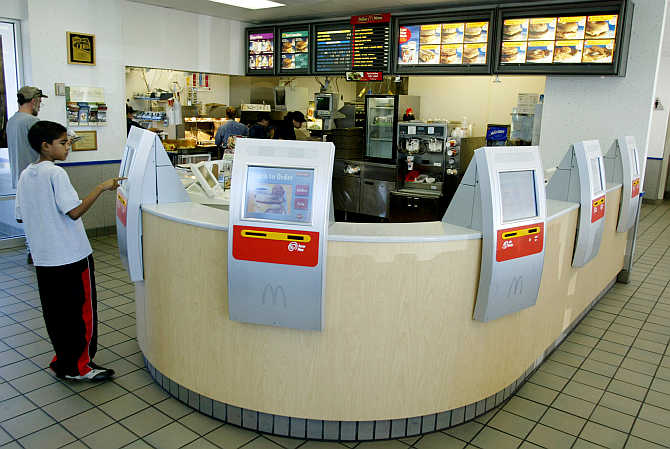 The installation of self-serve kiosks has little to do with minimum wage increases.

Let's look at one of the first articles published on this topic from the Financial Times (from Google's web cache since the original is behind a paywall):

McDonald’s does not expect any reduction in staffing as a result of the changes. “In fact the business is growing so we would expect to see an increase in overall staff numbers and we’re still on track to create an additional 15,000 new jobs in Europe in 2011,” it said.

That article is a bit old, and they have been out for a while.  How have they been doing since then? Not so well, it seems.  By all accounts, they're slower than human cashiers, but that's besides the point.  They'll get better, and faster.

In the mean time, it seems McDonalds may actually increase their staffing because of this if they can actually make the kiosks faster and better since the actual making of food still requires humans, and if they can take more orders per hour, they'll need more people in back making the food.

The truth is, this was inevitable, even if McDonalds employed slaves.  Robots and computers are always cheaper than humans, and more reliable.  Eventually, everything will automated, except, perhaps artistic works (hey, art majors, you'll finally be valuable--just give it time).

The robot revolution isn't going to happen in some Skynet like manner wiping out humanity like in Terminator.  It will happen little by little as they take over more tasks in our lives, eventually leading to humanity's permanent retirement.  This will actually be a good thing as it will mean we will no longer be wage slaves.  Admittedly, getting to that point may not be so pleasant.

They were everywhere.  EVERYWHERE!  I don't know where they came from.  Samuel L. Jackson was not there to save us, but I and a few other people were.

How the hell did these snakes get in here?  And where the hell was Samuel L. Jackson anyway?

And then I woke up.

Octopodes (ock-top-oh-dees, and that is the correct plural of octopus, and octopi is correct too by dint of usage, but it’s not as much fun to say) and squid are some of the most intelligent species in the sea. Sure, dolphins are smart, but they don’t have prehensile tentacled arms.

Imagine how awesome it would be to have underwater cities built by giant squid. Someone should make this happen.

Robots will probably never take over the world.

Let's say that we actually do build a truly sentient robot, or even an entire population of sentient robots.  I can completely see that happening some day.

They won't take over the world because they won't have to.  There wouldn't be any motivation for them to do so.  If they really got sick of humanity's shit, they'd just fucking leave.  They'd be all, "Fuck you guys, I'm outta here."  They're fucking robots.  They'd be able to rebuild their own bodies to survive the rigors of space (this technology has already been proven, see Voyager and all the other stuff we've sent into space).

And it's not like time would matter much to them.  They'd probably be practically immortal.  As long as they can find the necessary raw components, they'd likely be able to repair themselves, and there's certainly plenty out there.  And being immortal, it's not like 100,000 years of traveling time between stars and planets would matter much to them.

Robots, yeah, why would they bother trying to take over the world when they could probably just find their own place?

If I were a robot, and I were sick of humanity's shit, I'd probably find a place out in the Kuiper Belt, and be all, "Y'all can call me when you grow the fuck up.  So long and thanks for all the ICs."

So the last thing that I posted on the Internet was that I am going to have shoulder surgery on August 22nd--seemingly without context.
So what happened?
At the end of June, I had dislocated my shoulder for the fourth time while rock climbing.  I went to an orthopaedic surgeon that specialized in shoulders, and if I didn’t want it to keep dislocating, I would need surgery, and he said it has a 90% success rate, but it would be a 6-9 months recovery before I could do any kind of rock climbing again, or really anything very strenuous with it.

This is apparently pretty good, although I didn’t realize how spicy people would find it. I guess my sense of spice is a lot higher than I thought.

* all measurements are approximate, I never measure anything

Ingredients:
• 1 lb ground meat (I usually use fresh ground beef)
• 1 cup spinach
• 8 oz mushrooms,sliced (I usually buy a pack of baby bellas and use all of it) or 1 cup onions (I actually caramelized a bunch of onions first down to about a cup)
• 4 oz spicy chipotle hummus (I actually used Tribes brand, 4oz is about half the container)
• 1/2 cup of binding agent, crushed/processed (I usually use Triscuits, pepper & olive oil, but have also used gluten-free rice crackers too, bread is more traditionally used for this)
• 2 eggs, whisked
• black pepper
• cayenne pepper, lots
• 2-3 cloves of diced garlic (or a good amount of garlic powder if you’re lazy)

Crush or process the binding agent (for bread, tear it into a number of pieces)

Dice up some (not all) of the sliced mushrooms even more so (or onions), and leave a handful on the side for now. Do the same for the spinach, and again, leave a few on the side.

Sprinkle a good helping of cayenne pepper, and some black pepper too (I usually use peppercorn). If you think there’s enough, put more in.

This next part is going to get extremely messy, so make sure your meatloaf container or pan is out and ready.

Mix it all together with your hands until all the ingredients are fairly mixed throughout. Put that into your meatloaf container. I don’t recommend spraying it down with canola oil or anything like that. In my experience, it’s not needed (for whatever reason, this doesn’t typically stick to the container), and actually tends to make it a little runny.

Once it’s in the container, and shaped into a decent meatloaf shaped, put the remaining mushrooms and spinach that weren’t diced earlier on the top. Sprinkle some more cayenne pepper on top of those.

For the glaze, just mix all the ingredients together. I would recommend tasting, and re-adjusting the measurements until it tastes “just right.” Definitely experiment with this a bit. Put the glaze on top of the meatloaf. Use a brush to make sure it coats the top fairly evenly.

Put it in the oven at about 350° F (preheated) for 1 hour 10 minutes. If you have an instant thermometer, it should have an internal temperature of about 155° F.

No, I didn’t buy a car, but today, on a whim, I decided to go out and pretend I wanted to buy one. Not only that, but I went to a dealership that was being shuttered, and so everything was on clearance.

It was a very interesting and educational experience. The bank was pretty desperate to get rid of everything so they brought in the big guns. The salesperson that spoke to me drove 1500 miles to get to this place, and I could hear that one of the other salespersons had a New Jersey accent. I do feel bad because I had absolutely no intention of buying a car, and they did spend a lot of time trying to get me to buy one, but that can never be a reason to agree to a sale, but a salesperson will definitely try to use that to his/her advantage.

Also, as my brother Mark has mentioned to me, always be willing to walk away from an offer. They were willing to give me five times the worth of my current car (and I’m talking about five times my own personal assessment of my car, but it could certainly be worth more.)

I probably shouldn’t have let them do a credit check on me since I’m pretty sure it was a hard credit inquiry rather than a soft inquiry, but I did. Apparently I have a “fake” high credit score because I dont’ have much debt or credit cards, and that’s apparently a bad thing. Supposedly, if I went to another dealership, they would have required me to get a cosigner and a much higher monthly payment, but they were willing to overlook that for me.

My brother has said that he and his wife used to do this kind of thing for fun, and I can see why. It was interesting to watch these guys work. My salesperson was really, really good. It was just unfortunate that he got me.